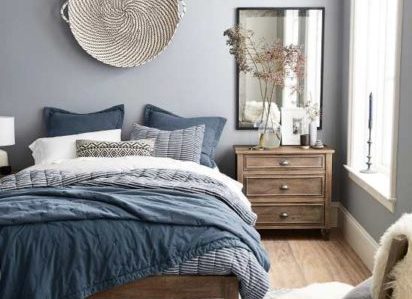 Americans do many things in the bedroom – watch TV, work, and exercise – but many of us aren’t doing the most important thing we need to do……sleep.

It is actually quite a serious matter.  The Center for Disease Control says up to 70 million of us don’t sleep through the night. It’s a health concern because lack of sleep can contribute to health issues, such as hypertension and obesity, as well driving and occupational injuries and fatalities.

Counting sheep, taking melatonin, listening to music and many other tricks help usher in a good night’s sleep.  But for many, there is another way.…

Paint it blue – maybe with two tones of the same blue color, or a silver accent, for a look that promotes relaxation.

“When you walk into the bedroom, you want it to transition into a really relaxing, restful space,” says interior decorator, Amy Contreras. “Bedrooms should feel a little bit Zen.”

Zen or not, several studies, including a study by Travelodge, found people who have a blue bedroom get the most sleep at night. Blue, the color of the sky and ocean, invokes a feeling of calm, promotes feelings of peace and serenity, and can even make a room feel bigger.

Combining light-to-mid shades of blue with pale yellow helps to infuse spaces with a sense of warmth, while adding light grey tones can keep things feeling cool and calm. In fact, in a new survey involving 2,000 Brits, an amazing 58% who sleep in blue rooms say they regularly wake up feeling happy. Cheerio!

Blue is also said to help reduce blood pressure and heart rate, for more sound sleep. Sleep expert, Chris Idzikowski, states “There are specialized receptors called ganglion cells in our retina that are sensitive to the color blue. These receptors … affect how we perform and feel during the day. That interaction between light, sleep and wakefulness is supremely important.”

While blue tops the list, it’s not for everyone. Shades of green, yellow and orange can also improve sleep quality.

Yellow:   certain shades of yellow come in second in promoting the best night’s sleep: seven hours and 40 minutes on average per night.  Warm yellow relaxes the body by stimulating the nervous system and calming the nerves.

Green:   creates a calm and soothing vibe, which is why it appears to be the third best color for getting sleep. People with green rooms get an average of seven hours and 30 minutes of sleep per night, and 22 percent of those surveyed say they wake up “feeling upbeat and positive.”

Orange:   surprisingly, a close fourth. The warm color also creates a stable and reassuring atmosphere and can even help digestion too – especially if you have eaten a large or late-evening meal, according to the survey.

Gray:   an incredibly popular house paint color, didn’t perform well in the study. It is thought that brown and gray can be “dreary and depressing”, especially in the bedroom, and make occupants feel emotionally isolated and uncomfortable — resulting in a restless sleep.”

Purple:  these bedrooms performed the worst for sleep. While elegant and artistic, the color is thought to be overly mentally stimulating, making it difficult to turn off a racing mind and switch into sleep mode.

Does room color affect sex?   Travelodge’s study also found some interesting tid-bits on how room colors affect your love life. Couples in bedrooms with a caramel decor scheme have sex, on average, three times per week. Apparently, not much magic happens in red bedrooms, where couples make love only once a week on average. Maybe add a caramel-colored light to heat things up?

Avoid Bright Colors in the Bedroom:   Contreras says people often make the mistake of using intense, bright colors in the bedroom. She says, “Visually, it can really increase the amount of energy in the room. That works against resting or relaxing because you feel really stimulated in that type of environment. I suggest that they use a flat paint instead of an eggshell paint. An eggshell paint will reflect more light where a flat paint will absorb it”.

Contreras says, “You can still have colors, but maybe they’re slightly muted and still have patterns, but they’re not taking over the space”.

What to do with all this info? Now that you know all there is to know about sleepy shades (and not so sleepy shades), take another look at your bedroom and see what the colors are doing for you and create the space that helps you relax and unload at the end of your day. Happy painting!